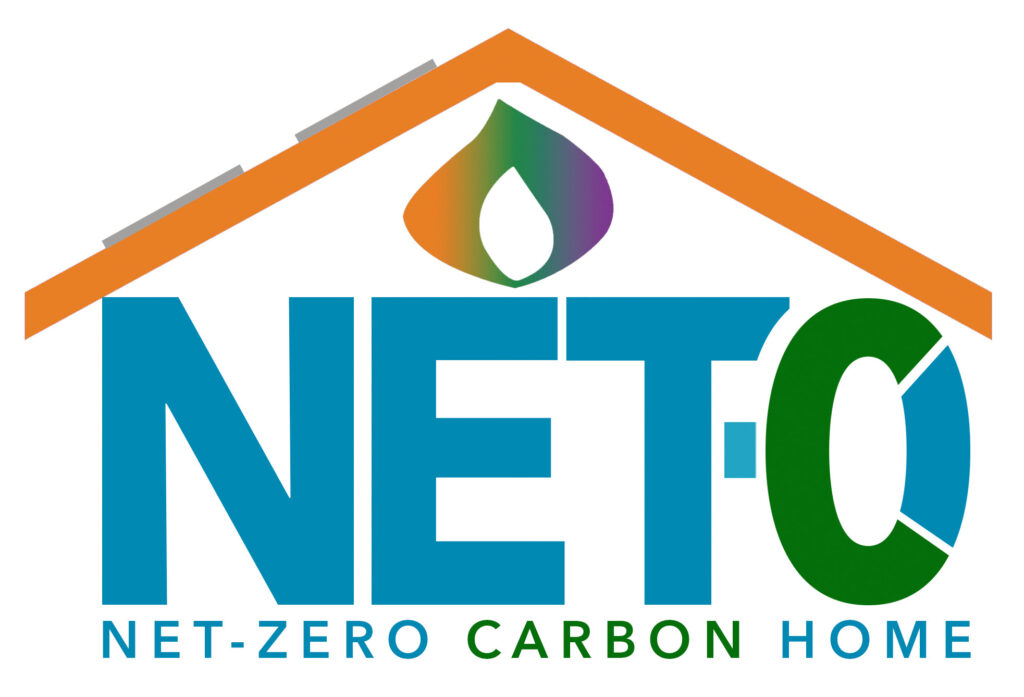 The National Oilheat Research Alliance (NORA) is setting out to prove that homeowners can reduce a home’s carbon emissions to zero using a renewable low carbon liquid fuel and solar panels. Indeed, the demonstration has already begun in Port Jefferson, NY at the home of NORA’s Director of Research, Dr. Thomas Butcher.

NORA has been a leader in the transition to low carbon liquid fuels in the home heating sector for decades through testing and promoting the use of the advanced biofuel biodiesel combined with traditional heating oil. NORA’s liquid fuels research laboratory in Plainview, NY is among the U.S.’s leading facilities conducting this type of research.

With public policy in many of the Northeastern states calling for drastic reductions in carbon emissions and traditional heating oil cannot satisfy those requirements, NORA intends to show that the combination of 100% biodiesel partnered with solar panels can bring the home to zero carbon emissions.

This strategy is an alternative to the “all electric” policy of replacing all combustion heating and other home appliances with power-grid run electric furnaces, boilers and appliances.

The all-electric plan will place enormous strain on the utilities and the grid while also placing massive financial burdens on homeowners as they are required to replace their current heating systems with heat pumps. NORA’s zero-carbon home can achieve carbon reduction mostly using existing heating systems and commercially available solar panel systems.

Taking the carbon out of the fuel: The first step in decarbonizing a home heating system is transitioning to a low carbon biofuel. The biofuel widely available to the heating market in the Northeast is biodiesel (ASTM D6751). Relative to petroleum No. 2 fuel, 100% biodiesel (B100) provides a carbon reduction of 75% to 90% with the higher 90% reduction based on the use of waste feed stocks such as used cooking oil. Replacing petroleum with B100 can provide reductions in carbon of up to 90%.

Work is ongoing within the biodiesel industry on reducing even the small amount of carbon emissions associated with biodiesel production and the picture is expected to get even better. The residual emissions can be minimized using a high-efficiency boiler of furnace.

The transition to B100 was made at the Butcher home in 2020 with the biodiesel fuel supplied by Hart Home Comfort, Oakdale, NY. The steel tank is indoors and approximately 15 years old. The tank was filled without cleaning prior to the introduction to B100. There have been no notable service issues since the transition. The heating system includes an Energy Kinetics System 2000, about 10 years old.

Adding Solar Panels: The second step is the addition of solar panels on the roof of the home, which can produce more or less power than the home needs at any time of the day. The system installed at Butcher’s home does not include a storage battery but rather “extra” power is exported back to the grid. The home’s historical annual electric power use is 7,199 kilowatt hours, including a central air conditioning system. The annual production capacity of the solar panels installed is a nominal 7,914 kilowatt hours. In addition to eliminating carbon associated with power used in the home, the surplus power sent back to the grid reduces carbon emissions further and provides an offset to the small amount of carbon emissions associated with the biodiesel use.

At the time the installation was planned, the residential power rate was approximately $0.23 per kilowatt hour. At this rate, the payback period was calculated at seven years with an effective annual payback of 14.3%. At the time of this writing, it has risen to $0.28 per kilowatt hour making the payback period drop to 5.74 years after which, the electric cost will effectively be zero.

“With uncertainty about future rates, I feel this was a great step to eliminate electric bills,” noted Dr. Butcher.

“These steps to quickly make my home carbon-free have been very easy, I didn’t make any changes to my heating system. The investment I have made in the solar panels will pay back quickly and I feel we are ready for the upcoming decades with a system that keeps us warm, provides plenty of hot water, and will end up being the cheapest approach.”

NORA’s Net Zero Carbon Home will continue to be monitored for financial returns and greenhouse gas (GHG) reduction values and upgrades to further the carbon emission reductions will be assessed.

NORA would like to extend the Zero-Carbon Home project to other U.S. States. If you have an interest in working with NORA, contact info@noraweb.org.

NORA’s goal is to create demonstration homes that are be net-zero emitters of carbon. Labeled the Net Zero Carbon Home Project, the homes will replace standard heating fuel with 100% biodiesel (B100) while relying on solar PV roof panels to generate renewable, carbon free electricity for non-heating uses. Since biodiesel is not yet fully carbon neutral, the solar PV system needed to be sized to produce more energy than the home requires. The excess carbon-free electricity could then be transferred back to the grid and offset the small amount of carbon emissions from biodiesel.

A calculator created by NORA utilizes a number of parameters such as fuel usage and electricity consumption to calculate how much oversizing of the PV system is required to make the home carbon neutral. The following table shows a sample calculation.

Table 1: Sample calculations that show how a home can be carbon neutral using biodiesel and solar PV
Click image to enlarge. 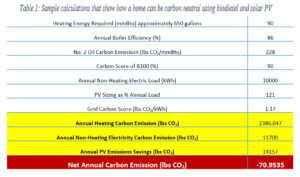 The first of these demonstrations is the home of Dr. Thomas Butcher, Director of Research of the NORA Liquid Fuels Laboratory in Plainview, NY. Dr. Butcher’s home was already using B100 for heating and subsequently solar PV panels were installed for the non-heating energy needs.

Using biodiesel consumption (due to hot water production), electrical usage and power generated by PV system, it was found that Butcher’s home was Net-Zero (and beyond) for the months of July, August and September 2022. This is shown in the figure below with comparative values of carbon emissions if he had been using No. 2 heating oil and did not have solar PV installed.

Despite a significant airconditioning load in the summer, as shown by the blue bars, each of the summer months contributed to a lowering of the carbon intensity of the grid by producing more energy than was used in the house, as shown by the brown bars.

The question as we enter the winter and biodiesel consumption increases, will the solar on his roof and the savings from the summer be enough to make his house a Net Zero home for the entire year. Preliminary calculations say “yes” but look forward to an update in the spring of 2023.

NORA is working with various state energy organizations to find additional suitable homes for this project.

Figure 1: Carbon emission comparison for Butcher home with and without proposed changes (B100 and solar PV)
Click image to enlarge. 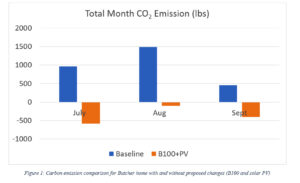